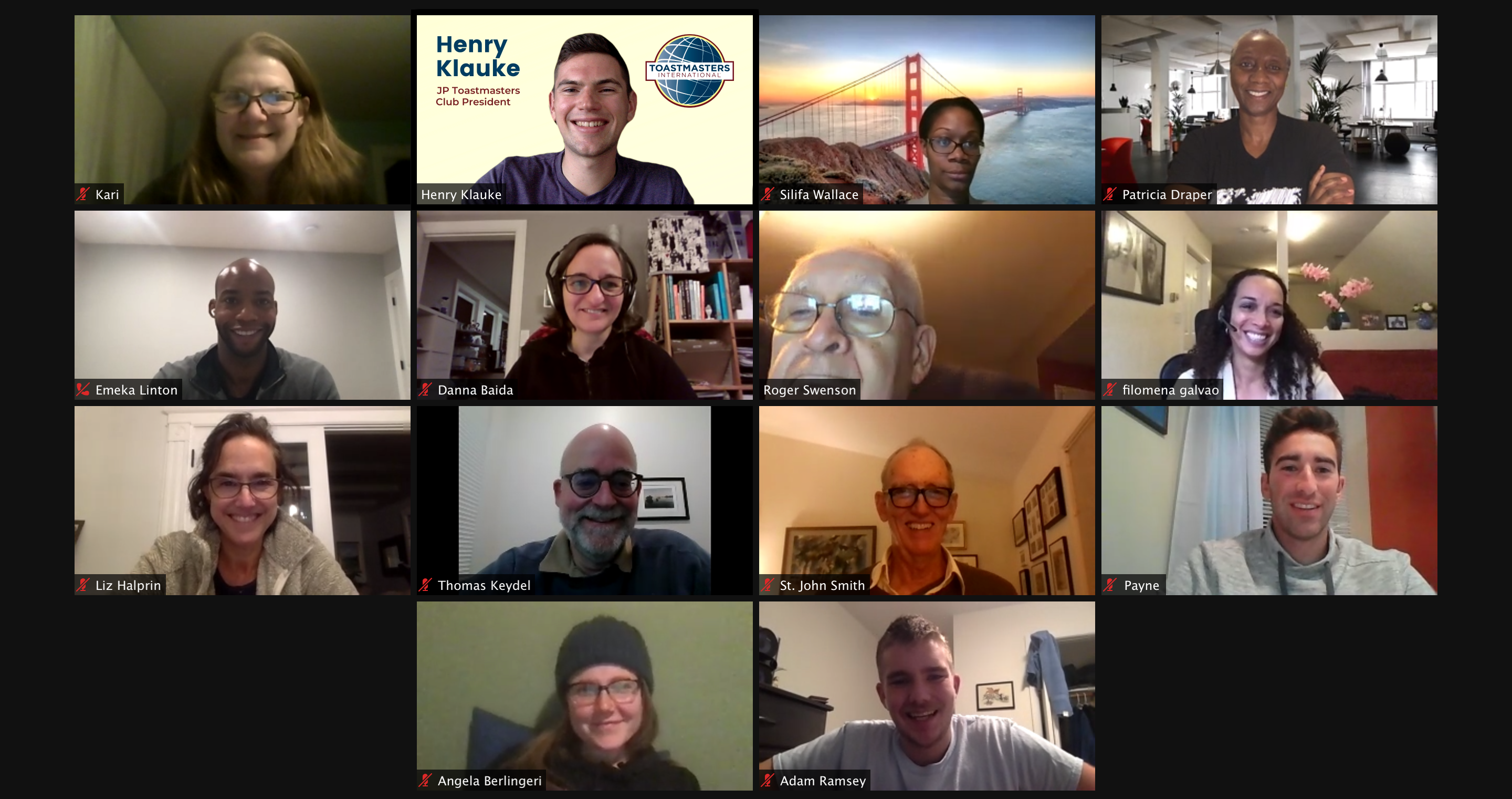 Club of the Quarter – JP Toastmasters

JP Toastmasters was nominated and selected as ‘Club of the Quarter’ due to its commitment toward to building a vibrant member experience. This is demonstrated by its successful and well-promoted events, including their October Open House, and its commitment to member recognition — recognizing new members, Ice Breakers, education awards, and Fantastic Firsts when a member takes on a role for the first time. The club also recognizes members with a Versatility Award for those who fill each different meeting role. Their commitment is reflected in their growth, as they’ve gone from 16 to 21 members in the past 7 months.

JP Toastmasters is a community club based in Jamaica Plain, and comprises a group of friendly neighbors, helping each other grow and develop as leaders and communicators.

In the “Before Times”, JP Toastmasters used to meet in the historic Eliot Hall in Jamaica Plain, home of The Footlight Club. Since March 2020, they have adapted to online meetings, keeping meetings enjoyable and engaging with exciting special events and activities. Since the beginning of the Toastmasters year, they’ve held a virtual Halloween-themed open house, multiple fun Table Topics and speeches that took advantage of the benefits of online tools, and welcomed new members and guests. Members are learning important lessons about communicating professionally in a virtual environment while meeting new friends and having fun. So far this year, the club welcomed 6 new members who are already on their way to excellence.

JP Toastmasters meets on the 2nd and 4th Monday of every month at 7:00 PM, and a Zoom link is available on our club’s website. 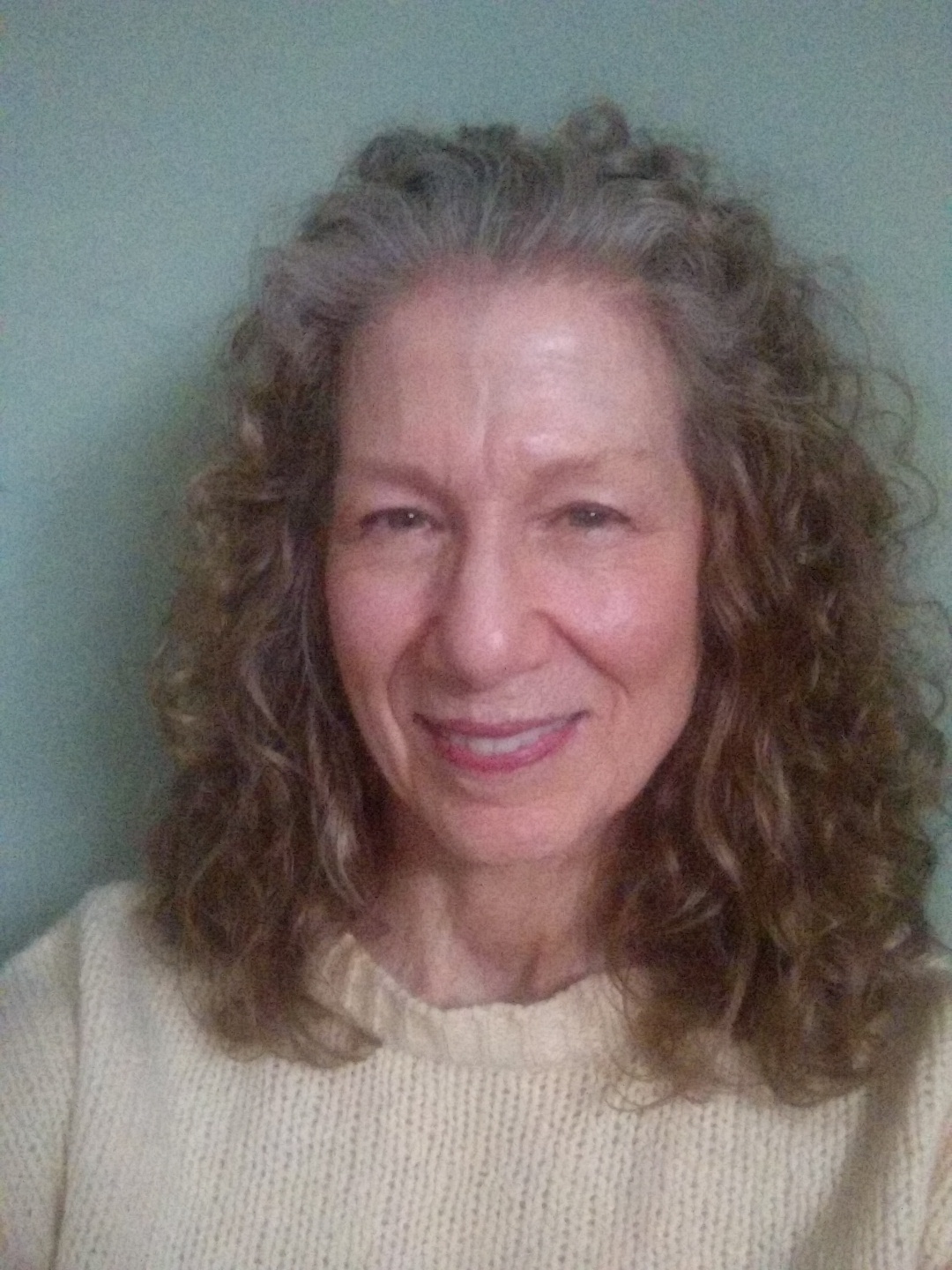 Caryl was nominated by multiple members of her club for her ability to motivate members as Club President, and in particular for the role she took on in managing their major workshop, The Art of Diplomatic Feedback, designed to teach techniques for effective speech evaluation. She was deeply involved in all aspects of leading the project, and members credit her with motivating and involving every single club member at a level that challenged them while also showcasing their strengths. In the process, club members also got to know each other better and develop a deep respect for each other.

Caryl joined Toastmasters in 2011 to tackle her fear of public speaking. As a development professional for a child focused nonprofit, Caryl knew that this second career depended on her ability to speak persuasively in front of crowds of supporters at annual galas. Even more challenging, a big piece of her job was to inspire audiences at local business club meetings and corporate information sessions to become donors. She wasn’t a kid anymore (!) and she knew she would have to work hard to overcome a lifetime of scaredycat-itis.

Toastmasters was her ticket. Working through the Competent Communicator manual gave her the public speaking fundamentals that she needed. The Competent Leadership manual gave her a framework for initiating and owning projects. Pathways provides her with the opportunity and the courage to create, develop and lead progressively more difficult projects that make a significant impact in her world.

Very close to her heart is the chance to give children the opportunity to develop public speaking skills at a young age … to give them what she had to learn much later in life. Leading a Youth Leadership Program does just that. Partnering with another Toastmaster, Caryl led fourteen 9th and 10th graders through the in-person program until it was truncated by the pandemic. Undaunted, she and her partner are leading another group of 8th graders through the YLP now 🙂 Online, of course.

Caryl’s first love is growth and development, for both herself and others. That’s why she loves Toastmasters so much. For her, the greatest joy is supporting another’s journey to reach a personal goal. As a mentor to a fellow Club member, Caryl gets that chance one-on-one. As President, she encourages goal-setting and celebrates members’ achievements as they happen.

Outside of Toastmasters, Caryl loves to dance (Lindy Hop!) and travel to places she has never been. During the pandemic, she does tons of yoga, takes long mountain hikes, and cross country skis when it snows. 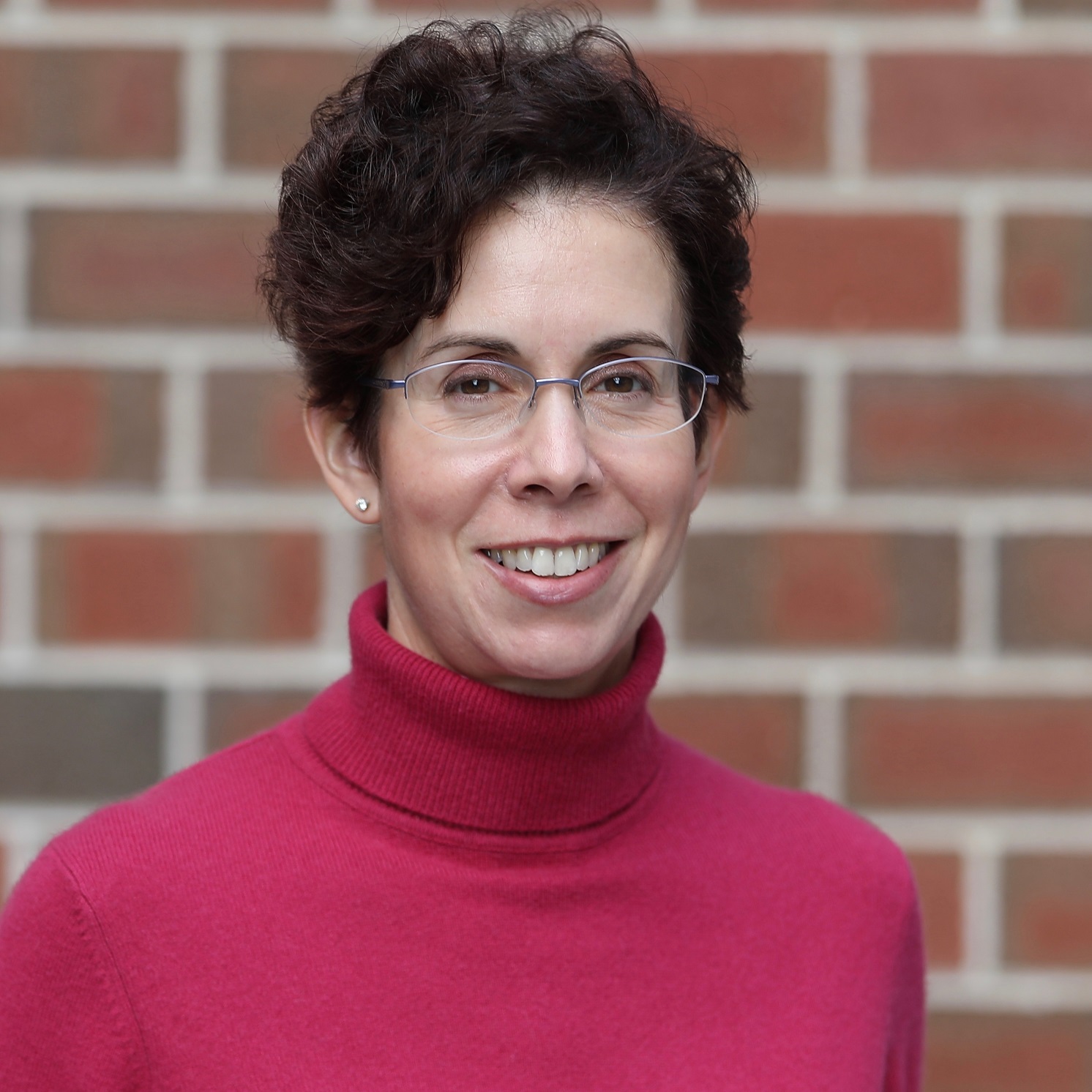 Marlene was nominated and chosen for recognition because she has really excelled in connecting the clubs and members of her Area. She coordinated with all four clubs in creating an Area Open House, that successfully involved members of each club, with multiple clubs leveraging social media platforms to promote the event effectively.

Marlene lives on Cape Cod with her husband, Jon, and their goldendoodle, Daisy. In good weather, she enjoys walks around Cape Cod or kayaking in the neighborhood kettle pond. Marlene earned a doctorate in higher education administration from Boston College and has worked in the field since 1998. She currently serves Massachusetts Maritime Academy as their Director of Institutional Effectiveness. In her role, she helps the university to be more successful in meeting its goals. In addition to Toastmasters, Marlene holds leadership positions with the New England Educational Assessment Network (NEEAN) and the North East Association for Institutional Research (NEAIR). 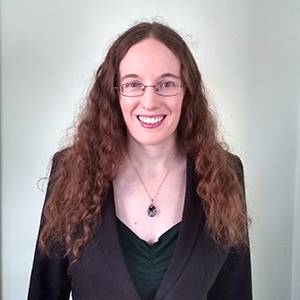 Division Director of the Quarter – Carly Cox, Division B Director

Carly has been selected for recognition for going above and beyond in her role as Division Director. Within her role, has identified areas of opportunity for all clubs in consultation with the club’s Area Director and is heading up a group to promote club growth and increase membership within Division B. Beyond her role, she has connected with Vice Presidents of Education across District 31 by conducting numerous Pathways for VPE training sessions. In addition, she is volunteering as part of the District 31 Club Coach support team.

Carly belongs to three Toastmaster clubs – Toast of the Town, Advanced Articulators of Andover, and Toastmasters at Ballardvale. Her awards received include CC, CL, ALB, DL1-4, VC1, and receiving District 31 Triple Crown two times! She has held roles as Club Sponsor and Club Coach as well as Area Director role twice. A fun fact about Carly is that she has played handbells since she was ten years old! Another fun fact is that she gave her first Ice Breaker speech nine months after first joining Toastmasters.

Carly loves being a Toastmasters because it is a fun way to learn and grow. In addition to the improvements she has experienced herself, she truly enjoys helping others improve themselves and cheering on their accomplishments. She also loves all the wonderful people she has met through Toastmasters.