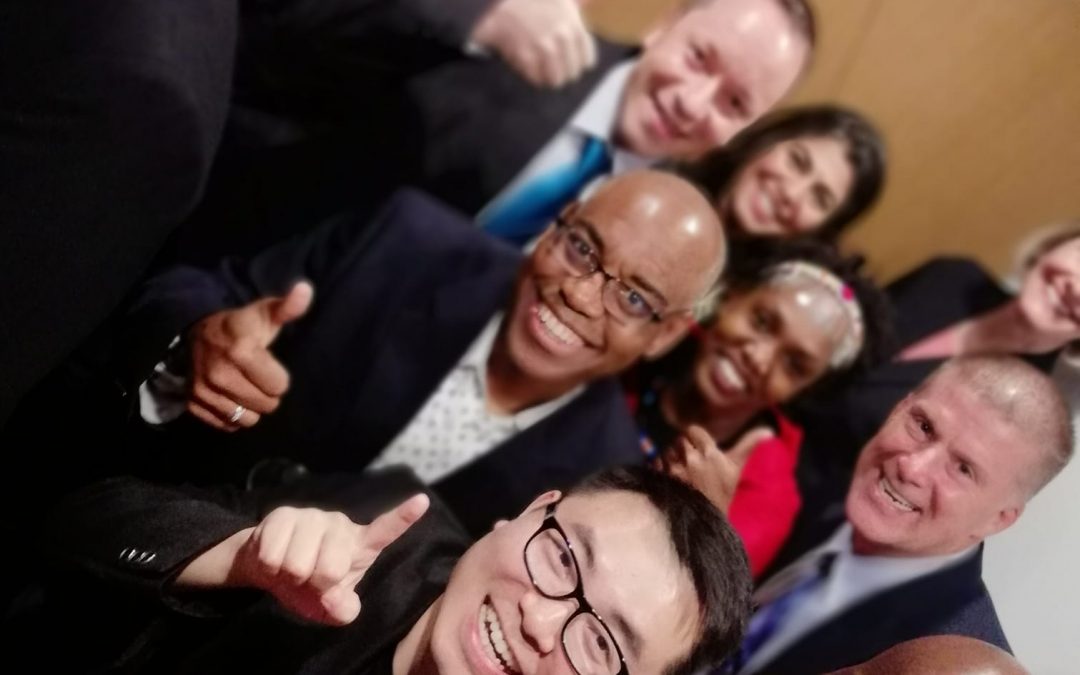 I just got back from representing District 31 in the Semifinals of the International Speech Contest at the 87th International Convention in Chicago. This was the fifth international convention I’ve been to and the fourth time I’ve had the honor and privilege of representing our District in the speech contest.

This was a special convention because it was the last time that each District will send their winner to compete in the Semifinals. The reason for this is that Toastmasters currently has 106 Districts (and is still growing) and it was becoming unwieldy to have all the contestants in 10 Semifinals. This year, my Semifinal had 11 contestants, making it the biggest contest I’ve ever participated in. Next year, all District winners will have videos of their District speech judged in a Region Quarterfinal. The 14 Region winners will then speak in two Semifinals at the International Convention in Denver.

I’ve definitely enjoyed the opportunity over the years to make friends with other contestants from all over the world. This year, I competed with speakers from Asia, Australia, Africa, and America in Semifinal 4. It was a wonderfully diverse group of talented speakers. We got close to each other after the Wednesday contestants’ briefing when we all caught the same elevator together!

My Semifinal was in the morning on Thursday. I had practiced well and was well-rested. I was the seventh speaker and I could not have asked for the speech to go better. The audience was really enthusiastic and reacted as I hoped they would in all the right places. My feeling is that from all my experiences at Toastmasters Conventions, including my 3rd place finish in the 2012 World Championship, this was my best speech and the best audience response. Unfortunately, in a talented group of speakers, I didn’t place. It was hard to be disappointed as the experience had been so uplifting and I don’t think I could have done anything better.

Two days later, I was in the audience of 2,000 people, watching the World Championship of Public Speaking. This contest was perhaps the overall highest quality of the five I’ve watched live. I think each year the contestants are pushing themselves to get better and are also being coached along the way to produce their best. J.A. Gamache from Canada, who has been to 12 semifinals and 4 finals, gave an astonishingly beautiful speech that I recommend watching.

In the end, the results came in:
3rd was Anita Taylor, who spoke memorably about her father’s advice: “It is what it is, it ain’t what it ain’t.”
2nd was Sherrie Su who had a very funny speech.
The Contest Chair then paused before announcing that history had been made and the whole audience realized that we had a new, female World Champion. History was made because women have never taken the top three positions in the same World Championship before!

1st was Ramona Smith who used boxing as a metaphor for her struggles with college, relationships, and speaking.

I’m a student of speech contests and I always try to learn from them and observe trends. Here are some of the observations I made this year:

• Girl Power! – It had been 10 years since the last female World Champion (LaShunda Rundles, 2008) and another one was long overdue. In the end, the Final had four very strong female speakers and they took the top three places! The fourth female, Wiwiek Najihah, gave a beautiful speech about her son and husband.
• The Power of Personality – The different contest winners that I saw let their strong personalities really shine through in their speeches.
• Toastmasters Humor – We all like a good joke and we all know that humor is important. This year, I saw an unprecedented number of “Toastmasters jokes,” especially in the Final. The audience lapped these up!
• Microphone Placement – You must ultimately be responsible for where to place your microphone. In my contest, I needed my microphone on my lapel, not my tie, to avoid interference when I reached into my suit pocket. I had to persuade the technician to do this, but luckily it worked out perfectly.
• The Power of Positivity – If you like the positive experience of Toastmasters, the International Convention is that on steroids! It’s impossible to come away without having made new friends and being more invigorated to get the most out of Toastmasters and life!

Fall contests are upon us and the International Contest starts again in only six months. I look forward to seeing everyone out there competing!